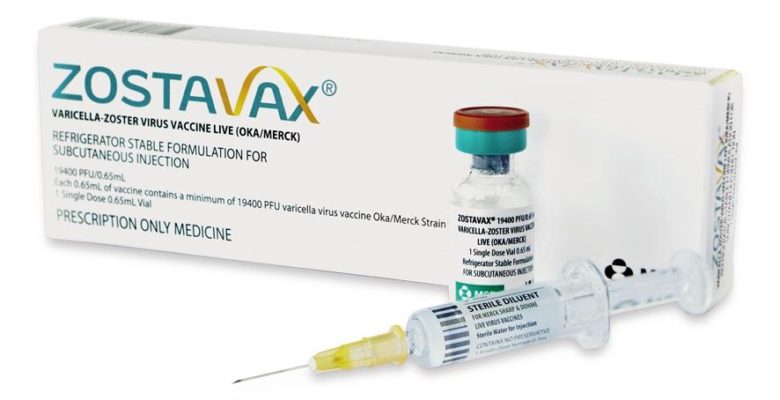 UPDATE: Merck discontinued sales of Zostavax in the U.S. on November 18, 2020. Zostavax is no longer available for use in the U.S.


Zostavax is a shingles (herpes zoster) vaccine made by Merck & Co. that is recommended for adults over 60 years old. It reduces the risk of skin rash from shingles and chronic nerve pain due to Post-Herpetic Neuralgia (PHN).

Zostavax® is a zoster vaccine that protects against shingles, which is a painful skin rash with blisters. Shingles is caused by the varicella zoster virus, the same virus that causes chickenpox.

Zostavax prevents shingles in 51% of people who are vaccinated at age 60 and protection lasts 5 years. In the general population, 99% of Americans are infected with varicella zoster and 30% develop shingles.

How is Zostavax given?

Zostavax is given in one dose as a 0.65-mL shot, and can be given in a doctor’s office or pharmacy.

Can Zostavax give you shingles?

Yes. Shingles is a side effect of Zostavax that was added to the label in August 2014.

Zostavax contains a live attenuated zoster virus, which means it is alive but weakened. A common side effect of Zostavax is a chickenpox-like skin rash that can transmit the varicella zoster virus in the vaccine to other people, causing chickenpox or shingles.

People whose immune system is not strong enough to fight off the varicella zoster virus in the vaccine may develop a serious infection that can result in life-threatening complications or death.

Who should NOT get Zostavax?

Some people should not get Zostavax, including those who:

What are minor side effects of Zostavax?

In most cases, Zostavax causes no serious side effects. Some people experience headaches or other mild reactions that last a few days, such as soreness, swelling, or itching where the shot was injected.

What are the most common side effects of Zostavax?

To learn more about the side effects associated with the shingles vaccine, please visit this page:  Shingles Vaccine Side Effects.

What is the risk of fever from Zostavax?

In clinical trials, 1.8% of Zostavax patients developed a fever within 42 days post-vaccination.

What are severe side effects of Zostavax?

Zostavax is associated with rare but serious side effects, including infections with the virus in the vaccine that caused death in patients who were too sick when they received the vaccine.

The most severe side effects of Zostavax include:

What other side effects were reported?

What ingredients are in Zostavax?

Zostavax is a lyophilized preparation of the Oka/Merck strain of live, attenuated varicella-zoster virus (VZV). Zostavax, when reconstituted as directed, is a sterile suspension for subcutaneous administration. Each 0.65-mL dose contains a minimum of 19,400PFU (plaque-forming units) of Oka/Merck strain of VZV when reconstituted and stored at room temperature for up to 30 minutes.

Can Zostavax cause a Shoulder Injury Related to Vaccine Administration (SIRVA)?

Yes. Zostavax is administered with a needle, and if the needle is injected improperly into the shoulder, it can potentially cause a Shoulder Injury Related to Vaccine Administration (SIRVA).

Can I file a Zostavax lawsuit?

If you or a loved one experienced a severe side effect of Zostavax, you may be eligible to file a Zostavax lawsuit against Merck & Co. A growing number of victims have already filed lawsuits accusing Merck of selling a dangerous vaccine and failing to warn about side effects.