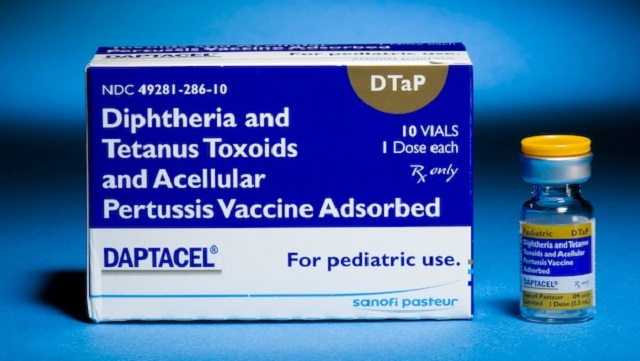 DTaP is an immunization that helps children under 7 develop immunity to diphtheria, tetanus, pertussis, and sometimes other diseases. The most serious side effects include allergic reactions, fevers, seizures, nerve damage, brain damage, and death.

Table of Contents
What is DTaP?
Why do we use DTaP instead of DTP?
What are DTaP vaccine names?
How many doses do I need?
Do I need a booster shot?
What are severe side effects of DTaP?
Does DTaP have a live virus?
Where can I get more information?

DTaP is an immunization against Diphtheria, Tetanus, and Pertussis (whooping cough). There are also DTaP vaccines that are combined with immunizations against other diseases, Polio, Hepatitis B, and Hib infections.

Why do we use DTaP instead of DTP?

What are DTaP vaccine names?

How many doses do I need?

Most children get 5 separate doses of DTaP starting when they are 2 months old. Children who can’t be given a vaccine against pertussis may receive the DT vaccine instead of DTaP.

One shot of DTaP is given at each of the following ages:

DTaP is not approved for anyone over 7 years old, but older people still need protection. People between 11 and 64 years old get a booster shot of the Tdap vaccine, which is similar to DTaP.  The difference is that Tdap contains lower doses of vaccines against diphtheria and pertussis. After one shot of Tdap, the Td vaccine booster shot is recommended every 10 years.

What are severe side effects of DTaP?

Does DTaP have a live virus?