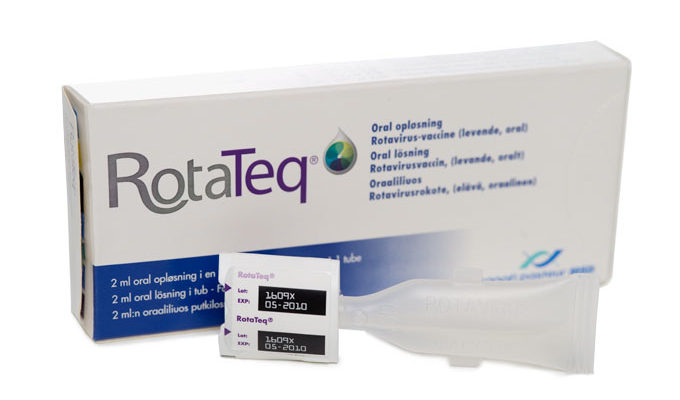 The most severe rotavirus vaccine side effect is intussusception, a potentially deadly intestinal blockage. Risk estimates range from 1 in 20,000 to 1 in 100,000 infants who get rotavirus vaccines.

How is the rotavirus vaccine given?

Rotarix is given in a series of two doses orally, with one dose given at age 2 months and the other dose given at age 4 months. Rotarix is approved for use in infants 6-24 weeks old. Each dose is 1-mL and it is given orally with drops in the mouth. The second dose should be given after an interval of at least 4 weeks and before 24 weeks of age.

RotaTeq is given in a series of three doses orally, with one liquid dose given at the ages of 2 months, 4 months, and 6 months. Each dose is 2-mL and it is given orally with drops in the mouth. RotaTeq is approved forinfants between 6 weeks and 32 weeks old. Each subsequent dose is administered at 4- to 10-week intervals. The third dose should not be given after 32 weeks of age.

Can the vaccine cause rotavirus?

Yes. Infants who get rotavirus vaccines will shed the virus in their stools for several days or weeks. Caregivers or other children who ingest the virus can become infected with rotavirus. Caregivers must be extra careful to wash their hands after changing diapers to avoid transmission or infection with rotavirus.

There are reports of vaccinated infants developing gastroenteritis, including severe diarrhea and prolonged shedding of rotavirus, when they were given RotaTeq and later identified as having Severe Combined Immunodeficiency Disease (SCID).

Administration of Rotarix in infants suffering from acute diarrhea or vomiting should be delayed. Safety and effectiveness in infants with chronic gastrointestinal disorders and immunodeficiencies has not been evaluated.

What are common side effects of the rotavirus vaccine?

The following is a list of the most common side effects of RotaTeq observed in clinical trials:

The following is a list of the most common side effects of Rotarix (at least 5% of patients) that were observed in clinical trials:

What are severe side effects of the rotavirus vaccine?

Allergic reactions may be severe and include face or mouth swelling, difficulty breathing, wheezing, hives, and/or skin rash.

Kawasaki disease is a severe side effect that can affect the heart. It causes inflammation of the walls of the blood vessels. The signs include fever, rash, red eyes, red mouth, swollen glands, swollen hands and feet, and death.

The first sign of intussusception after a rotavirus vaccine may be sudden, loud crying caused by abdominal pain in an otherwise healthy infant. Other frequent symptoms of intussusception include vomiting, stools mixed with blood and mucous, acting very irritable, drawing the knees up to the chest, straining, recovering between bouts of pain, or fatigue and weakness from crying.

What is the risk of intussusception from rotavirus vaccines?

There are about 1 to 1.5 cases of intussusception for every 100,000 first doses of the rotavirus vaccine. For the full 2-dose or 3-dose series, risk estimates range from between 1 in 20,000 infants to 1 in 100,000 infants. The highest risk is between 7 and 21 days of the infant’s first or second dose of rotavirus vaccines.

The following side effects have been reported since market introduction of Rotarix or RotaTeq, but it is unknown if they were caused by the rotavirus vaccine: