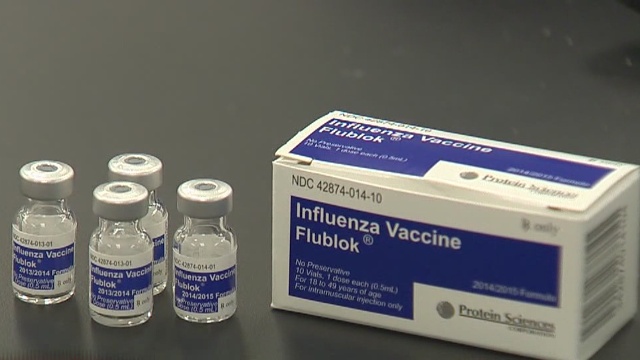 Flublok is an egg-free flu vaccine for people over 18 years old. Unlike most other flu shots, Flublok is made in insect cells and it contains a flu virus protein rather than inactivated flu viruses. 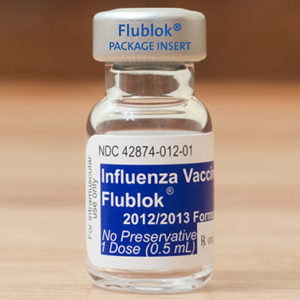 How is Flublok made?

Unlike other flu shots, Flublok is not made in eggs. Instead, Flublok is an insect-based flu shot. The manufacturing process involves programming insect cells that are grown in steel tanks to produce large amounts of a flu virus protein called hemagglutinin. This process can make a lot of vaccines far more quickly than egg-based vaccines, which is a big advantage in the event of a pandemic.

Flublok is made using the cells of Spodoptera frugiperda, a common pest known as the “fall armyworm” that mainly attacks corn crops. It is a type of moth that is native to North America.

How is Flublok given?

Flublok is given in a single 0.5-mL injection in the upper arm.

Can Flublok give you the flu?

No. Flublok contains non-infectious proteins that can’t cause the flu. In clinical trials, about 1-2% of people developed mild flu-like symptoms (cough, runny nose, sore throat, congestion, etc.) as their body developed immunity, but this is not the flu.

Can anyone get Flublok?

No. Flublok is only for people who are at least 18 years old.

Who should NOT get Flublok?

Flublok is contraindicated in people who are younger than 18 years old. It should not be given to anyone who has experienced a severe allergic reaction to any ingredient in the vaccine (see below for a list).

The decision to give Flublok should be carefully considered in anyone who experienced Guillain-Barré Syndrome (GBS) within 6 weeks of a previous flu shot. The 1967 swine flu vaccine was associated with an increased frequency of GBS.

What are the most common side effects of Flublok?

What are severe side effects of Flublok?

What ingredients are in Flublok?

Flublok contains 45 micrograms (mcg) of hemagglutinin (HA) for each of the three flu strains, for a total of 135 mcg HA per 0.5-mL vaccine. Flublok has about 3X the amount of HA compared to other flu shots.

Does Flublok have thimerosal?

No. Flublok does not contain thimerosal, which is a mercury-based preservative, or any antibiotics or adjuvants.

Can Flublok cause a Shoulder Injury Related to Vaccine Administration (SIRVA)?

If the flu vaccine Flublok is injected improperly into the shoulder, the vaccine can potentially cause a Shoulder Injury Related to Vaccine Administration (SIRVA). This painful side effect is more likely to occur when the vaccine is accidentally injected too high or too deep, causing injury to the bursa in the shoulder.

Can Flublok cause Guillain-Barre Syndrome (GBS)?

Flublok is associated with a risk of Guillain-Barré Syndrome (GBS), a side effect that can potentially cause nerve damage and paralysis.

Can I file a Flublok lawsuit?

If you were diagnosed with SIRVA or GBS after receiving Flublok, you may be able to file a lawsuit and seek up to $250,000 from the Vaccine Injury Compensation Program (VICP).

One Reply to “Flublok Vaccine”