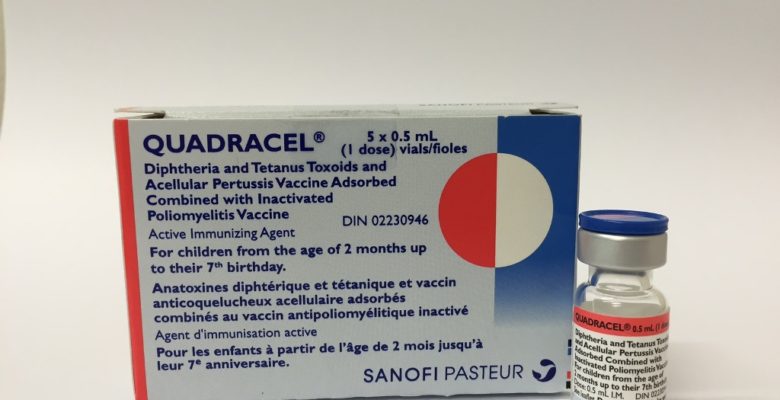 Quadracel is a shot that can be given as the last dose in the DTaP (diphtheria, tetanus, pertussis) or IPV (polio) series of immunizations. The most serious side effects include high fever, seizure, brain inflammation, and deadly allergic reactions.

Quadracel® is a DTaP/IPV vaccine against diphtheria, tetanus, pertussis, and polio. It is made by Sanofi and it was approved in 2015.

Quadracel is only approved for the fifth dose in the DTaP series of vaccines against diphtheria, tetanus, and pertussis (whooping cough). DTaP is given in a series of 5 shots, one shot at each of the following ages: 2 months, 4 months, 6 months, 5-18 months, and 4-6 years old.

Quadracel can be used for the last dose in the IPV (Inactivated Polio Virus) immunization schedule. Four doses of IPV are usually given at the ages of 2 months, 4 months, 6-18 months, and 4 to 6 years old.

When is each shot of Quadracel?

No. One shot of Quadracel is used as the final dose to complete the DTaP and IPV series of vaccines. Most adults will not need any more vaccines against polio. However, DTaP booster shots (Tdap and Td vaccines) are needed from the ages of 12-64 years old.

What are the most common side effects of Quadracel?

In clinical studies, the most common side effects where the injection was administered were pain (75%), increased arm circumference (65%), redness (55%), and swelling (40%). Other common side effects were muscle pain (50%), malaise (35%), headache (15%), and fever (6%). About 1.5% of children developed extensive swelling of the limb where the shot was given, including the elbow and/or shoulder.

What is the risk of fever from Quadracel?

Parents should carefully consider the risks and benefits of giving Quadracel to children with a history of fever over 105°F within 48 hours after a previous vaccine containing pertussis (whooping cough).

Who should not get Quadracel?

Children should not get Quadracel if they had a severe allergic reaction to any ingredient in Quadracel (see below for a complete list) or a previous vaccine against diphtheria, tetanus, pertussis, or polio.

Quadracel is also contraindicated in children who developed encephalopathy (coma, decreased consciousness, seizures, etc.) within 7 days of a previous vaccine against pertussis.

What are severe side effects of Quadracel?

Quadracel has been linked to spontaneous reports of other side effects. It is unknown if Quadracel actually caused these injuries, but the following is a list of possible risks:

What else is in Quadracel?

The following is a complete list of ingredients in Quadracel: