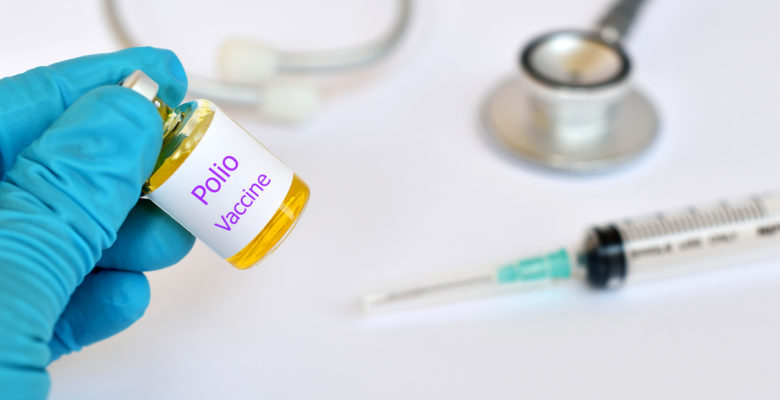 Polio is eradicated in the United States, but children are still routinely immunized with the Inactivated Polio Vaccine (IPV) or combination vaccines against the poliomyelitis virus.

What is the polio vaccine?

On March 26, 1953, American researcher Dr. Jonas Salk announced on national radio that he had successfully tested the first vaccine against poliomyelitis, the virus that cause polio.

The year before the vaccine was created, an epidemic of polio infected 58,000 people and caused 3,000 deaths. About 25 years later, in 1979, polio was declared eradicated in the United States as a result of widespread polio vaccination programs.

Vaccinations against polio did not stop when it was eradicated in the U.S., because poliovirus is still a threat in parts of Asia and Africa and international travelers can carry the disease. Even if you were previously vaccinated, you may need a booster shot before traveling.

What are polio vaccine names?

There are two types of polio vaccines:

The most commonly-used vaccine is IPV, also known as the “Salk Vaccine,” which consists of inactivated (killed) strains of all three poliovirus wild-type strains.

The oral vaccine OPV is used in some parts of the world, but it has not been used in the U.S. since 2000 because it has a small risk of causing Vaccine-Associated Paralytic Poliomyelitis (VAPP), particularly in infants, as well as Guillain-Barré Syndrome (GBS) and Transverse Myelitis.

There is one vaccine against polio:

There are also four combination vaccines against polio and other diseases:

Who gets the polio vaccine?

Most people get the polio vaccine (IPV) when they are children. It is part of the routine childhood immunization series in the U.S.

Polio vaccines are not routinely recommended for adults, but some high-risk adults should consider polio vaccination, including:

Four shots of IPV are routinely recommended for U.S. children. Most adults do not need a polio vaccine, but 1-3 shots may be recommended for high-risk adults and travelers to certain countries.

What is the immunization schedule for polio?

For best protection, children should get 4 doses of the polio vaccine. The vaccine is given as an injection (shot) in the arm or the leg. Ideally, children should receive one shot at each of the following ages:

The immunization schedule for polio may be different for some children, including children who are traveling to certain countries, and children who got the polio vaccine in combination with other vaccines.

Most adults do not need a polio vaccine because they were already vaccinated against polio as children. However, high-risk adults may need 1-3 doses of the polio vaccine, depending on how many doses of polio vaccines they had in the past.

What are common side effects of polio vaccines?

The most common side effects of Ipol IPV polio vaccine:

To learn more about the side effects associated with the polio vaccine, please visit this page: Polio Vaccine Side Effects.

What are severe side effects of polio vaccines?

Shoulder Injury Related to Vaccine Administration (SIRVA) is a severe side effect that occurs when the vaccine needle accidentally hits a tendon, ligament, or the bursa in the shoulder. It can cause chronic pain and severe weakness or limited mobility in the arm.

Anaphylaxis is a severe, life-threatening allergic reaction that can occur after a polio vaccine. Symptoms would appear in a few hours and may include rash, dizziness, swelling, or trouble breathing. Some polio vaccines contain small amounts of the antibiotics streptomycin, polymyxin B, or neomycin, which sometimes cause allergic reactions.

The following is a list of severe side effects that were reported in patients who received a polio vaccine, but so rarely that it is unknown if they were actually caused by the vaccine:

Previous ArticleWhat is the Pneumonia Vaccine?
Next ArticleFrench Drug-Maker May Get U.S. Taxpayer’s Zika Vaccine