Pediarix is a combined immunization against diphtheria, tetanus, pertussis (whooping cough), polio, and hepatitis B. It is given in 3 shots to babies under 6 months old. Pediarix is more likely to cause fevers than separate vaccines. Other serious side effects include allergic reactions, seizures, brain damage, and death. 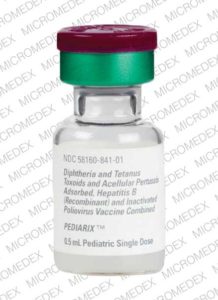 Pediarix® is a DTaP-HepB-IPV vaccine made by GlaxoSmithKline that was approved in 2002. It is an inactivated bacterial and viral vaccine against polio, hepatitis B, diphtheria, tetanus, and pertussis.

DTaP is a vaccine against diphtheria, tetanus, and pertussis. It is given in a series of 5 shots at the ages of 2 months, 4 months, 6 months, 15-20 months, and 4-6 years old. Pediarix can be used for the first 3 shots, but 2 more shots are needed to complete the series.

IPV stands for Inactivated Polio Vaccine. It is an immunization against poliomyelitis, more commonly known as “polio,” that is given in a series of 4 shots at the ages of 2 months, 4 months, 6-18 months, and 4-6 years old. Pediarix can be used for the first 3 shots, but 1 more dose of IPV is needed to complete the polio immunization schedule.

Hepatitis B or “HepB” is a liver disease that is caused by a virus. The vaccine is given to babies soon after they are born. It is given as 3 or 4 shots over a 6-month period and is usually complete by the the time the baby is 6 months old. Pediarix completes this vaccine schedule.

When is each shot of Pediarix?

One shot of Pediarix is given at the age 2 months, 4 months, and 6 months. It can be given to children up to 6 years old. It is not licensed for booster shots, infants under 6 weeks, or children over 7 years old.

Yes. Pediarix should be followed with 4th and 5th doses of DTaP and a 4th dose of IPV at appropriate ages.

What are the most common side effects of Pediarix?

What is the risk of fever from Pediarix?

Pediarix is more likely to cause fever than separate vaccines against the same diseases. The risk depends on the dose of Pediarix. Fevers over 100.4°F occurred within 4 days of Dose 1 (28%), Dose 2 (39%), and Dose 3 (33%) of Pediarix. About 1% needed medical attention.

Who should not get Pediarix?

Pediarix is not safe for children who had a severe allergic reaction to a previous vaccine against diphtheria, tetanus, pertussis, hepatitis B, or polio, or any other ingredient in Pediarix (see below for a full list).

Pediarix should not be given to children who have progressive neurologic disorders or encephalopathy (brain inflammation) within 7 days of a previous vaccine containing pertussis.

There is latex in the tip-cap on Pediarix syringes, which can cause allergic reactions in people who are allergic to latex.

What are severe side effects of Pediarix?

What else is in Pediarix?