FluMist is a nasal spray flu vaccine. It was discontinued in 2016-2017 flu season because it was only 3% effective in the previous three flu seasons. FluMist contains a live flu virus that can cause infections, asthma, fevers, and other serious side effects. 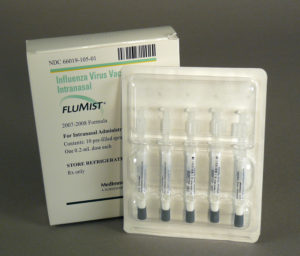 FluMist® is a vaccine against influenza (“the flu”) that is administered as a nasal spray. It was originally approved as a Trivalent (three-strain) vaccine in June 2003. The Quadrivalent (four-strain) vaccine was approved in February 2012 for people aged 2 to 49 years old.

FluMist was not recalled, but it was not available in the 2016-2017 flu season because it was not effective at preventing the flu in the previous three flu seasons.

FluMist worked only 3% of the time in children, compared to 63% effectiveness in children who received a normal flu shot in the 2015-2016 flu season, according to the Centers for Disease Control (CDC). Studies of the last 3 years of flu vaccines showed that FluMist did not work at preventing the H1N1 flu strain.

How is FluMist made?

FluMist contains a live virus that is grown in fertilized chicken eggs.

How is FluMist given?

Each nasal sprayer contains a single dose (0.2-mL) of FluMist Quadrivalent. Approximately 0.1-mL dose is sprayed into each nostril. The tip attached to the sprayer has a nozzle that produces a fine mist that is primarily deposited in the nose and nasopharynx.

FluMist was popular because it does not require a needle. It is the only non-injection based flu vaccine on the market. About half of all flu vaccines given in schools were with FluMist until it was discontinued.

Can FluMist give you the flu?

FluMist contains a live flu virus that has been attenuated, or “weakened.” All other flu shots contain a dead (inactivated) flu virus.

The live virus in FluMist can cause flu-like symptoms. The virus must cause an infection and grow in the nose to trigger an immune response. The nasal secretions (snot) of someone who has received FluMist may remain contagious for up to 28 days.

Who should NOT get FluMist?

FluMist is not recommended for the 2016-2017 flu season. It is not for anyone younger than 2 years old, or older than 49 years old.

FluMist is contraindicated in anyone who has had a severe allergic reaction (e.g. anaphylaxis) to any ingredient in FluMist (see below for a list), including eggs or egg proteins, or a previous flu vaccine.

FluMist is contraindicated in children and adolescents who are taking aspirin due to the risk of developing Reye’s Syndrome.

Can I get FluMist if I am sick?

FluMist has not been studied in people who are sick or have a weak immune system (immunocompromised) due to other illnesses. FluMist contains a live virus and it is possible that it could cause an infection in people who do not have a strong enough immune system to fight it off.

Can I get FluMist if I have asthma?

Children younger than 5 years old with asthma or recurrent wheezing may have an increased risk of wheezing after receiving FluMist. In clinical trials, hospitalization and wheezing were more likely in children under 2 years old who received FluMist.

What are the most common side effects of FluMist Quadrivalent?

What are severe side effects of FluMist?

What ingredients are in FluMist?

Each pre-filled FluMist Quadrivalent sprayer contains a single 0.2-mL vaccine against four types of flu viruses (two type A and two type B).

Can FluMist cause Guillain-Barre Syndrome (GBS)?

Yes. FluMist is a flu vaccine that could potentially lead to a severe side effect called Guillain-Barré Syndrome (GBS), which is a rare nervous system side effect that can cause paralysis.

Can I file a FluMist lawsuit?

If you or your child had Guillain-Barré Syndrome (GBS) from a FluMist flu vaccine, contact us today for information regarding a FluMist lawsuit.