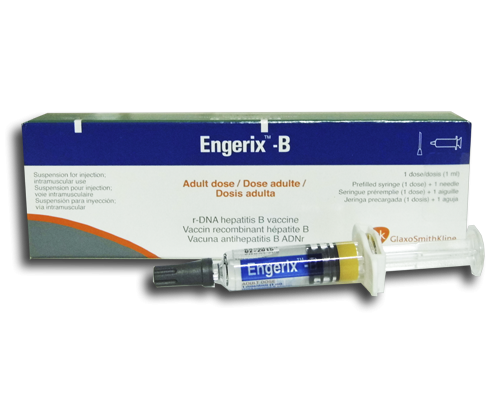 Engerix-B is a vaccine against Hepatitis B that is given in a series of 3 shots. The most common side effects are fatigue and soreness where the shot was given. 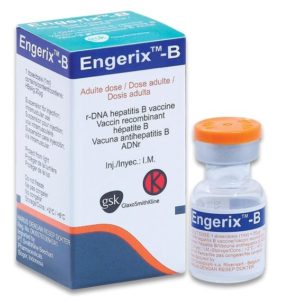 Engerix-B® is a recombinant Hepatitis B vaccine. It protects against liver infections caused by the Hepatitis B virus (HBV). Engerix-B was approved by the FDA in 1989 and it is made by GlaxoSmithKline.

Engerix-B is administered by intramuscular injection. The preferred injection site is the thigh for infants under 12 months old, or the deltoid muscle of the upper arm in older children and adults.

Engerix-B is usually given in a 3-shot series, but a 4-shot series (with the fourth shot given 12 months after the first) is recommended for newborns of mothers who are infected with Hepatitis B, people who were recently exposed to the virus, and travelers to high-risk areas.

Adults over 20 years old receive a series of three shots (1-mL each), on a 0-month, 1-month, and 6-month immunization schedule.

Adults on hemodialysis receive a series of four shots (2-mL each), given as a single 2-mL dose or two 1-mL doses on a 1-month, 1-month, 2-month, and 6-month immunization schedule. Booster shots may be needed if antibody levels decline below 10-mIU/mL.

Who should NOT get Engerix-B?

Engerix-B is not for anyone who experienced a severe allergic reaction (e.g. anaphylaxis) after a previous Hepatitis B vaccine, or any component in Engerix-B, including yeast. The tip caps of the prefilled syringes contain rubber latex that may cause allergic reactions.

What are the most common side effects of Engerix-B?

What are severe side effects of Engerix-B?

Premature babies have developed apnea (temporarily stop breathing) after receiving Engerix-B. Decisions about when to administer the vaccine to premature infants should be based on consideration of the infant’s medical status, and potential risks and benefits of the vaccine.

SIRVA (Shoulder Injury Related to Vaccine Administration) is a side effect that occurs when the needle damages tendons, ligaments, or the bursa in the shoulder. It can cause chronic shoulder pain, limited range of motion, and disability. It is not caused by nerve damage.

What ingredients are in Engerix-B?

No. Engerix-B is formulated without preservatives.