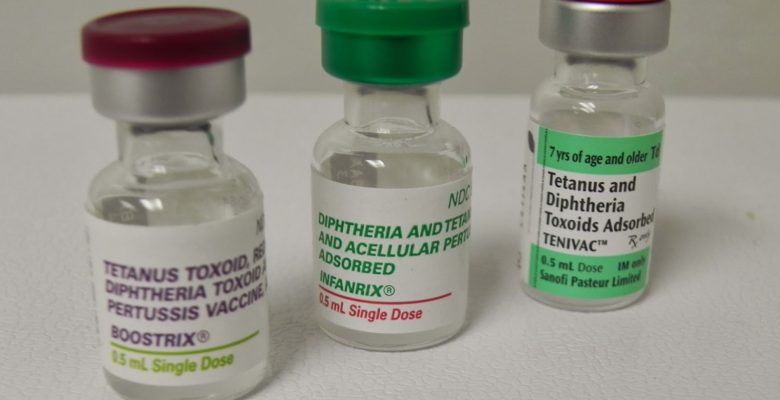 All diphtheria vaccines are combined with vaccines against other diseases. There are four types: DTaP, DT, Tdap, and Td. The most serious side effects include allergic reactions, fevers, seizures, nerve damage, brain damage, and death.

What are diphtheria vaccines?

Diphtheria vaccines contain diphtheria toxoid, a toxin made by the diphtheria bacteria. This toxin can’t cause the disease diphtheria. Instead, it triggers an immune response. This helps the body develop anti-toxin antibodies and immunity to diphtheria.

What type of diphtheria vaccine do I need?

In the United States, all diphtheria vaccines are combined with vaccines against other diseases to reduce the total number of shots. There are four types: DTaP and DT are given to children under 7 years old, while Tdap and Td are given to older children and adults.

The upper-case letters stand for full-strength doses of diphtheria (D) toxoids. The lower-case “d” means a lower dose of diphtheria in vaccines for adults and teenagers.

DTaP is an immunization against three bacterial diseases: diphtheria, tetanus, and pertussis (whooping cough). Some types of DTaP vaccines also protect against Polio, Hepatitis B, and Hib infections. DTaP is given in 5 separate shots in children starting at 2 months old.

DT is a generic vaccine against diphtheria and tetanus for children who should not get DTaP or other vaccines with pertussis. DT is given in a 5-dose series of shots on the same schedule as DTaP, at the ages of 2 months, 4 months, 6 months, 5-18 months, and 4-6 years old. The DT vaccine is made by Sanofi and it has been sold since 1997.

Tdap is a one-dose booster shot against diphtheria, tetanus, and pertussis for people between 10 and 64 years old. There are two Tdap vaccines on the market in the United States:

Td is a vaccine against diphtheria and tetanus that is given as a booster shot every 10 years for adults. There are two types of Td vaccines in the United States:

Why do we use DTaP instead of DTP?

DTaP is a safer version of an older diphtheria vaccine called DTP (or “DTwP”). There are no DTP vaccines in use in the United States. The “a” in DTaP stands for acellular pertussis. It is less likely to cause side effects than whole-cell pertussis in DTP.

What are DTaP vaccine names?

Children under 7 years old should get 5 shots of the diphtheria vaccines DTaP or DT, one shot at each of the following ages:

Children need a booster shot of the Tdap vaccine at the age of 11 or 12 years old. Adults who did not get it at that age should still get one booster shot of Tdap, which is approved for adults up to 64 years old.

Ten years after the Tdap booster shot, adults will need another booster shot called Td. It is an immunization against diphtheria and tetanus, but not pertussis. Td vaccines are given every 10 years.

Yes. The diphtheria vaccine DTaP is not for anyone over 7 years old, but older people still need protection against diphtheria. Another vaccine called Tdap is similar to DTaP. One dose of Tdap is recommended for people between 11 and 64 years old. Afterward, another booster shot called Td is given every 10 years.

What are severe side effects of diphtheria vaccines?

The risk of severe side effects depends on the type of diphtheria vaccine, dose number, age of the patient, and other factors. Please refer to the package inserts on specific vaccines for a complete list.

The following severe side effects have been reported following diphtheria vaccines: