Afluria is a flu vaccine that comes in several varieties for children and adults, including one with a needle-free delivery system called PharmaJet. Afluria was associated with a 23% risk of fever in children under 3 years old in clinical trials. 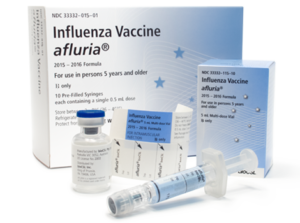 Afluria is an immunization against influenza (“the flu”). There are several versions approved in the United States:

What happened with the 2010 vaccine?

CSL’s 2010 Southern Hemisphere flu shot was linked to increased reports of fever and febrile seizures (fever-induced seizures) in children under the age of 5 years old compared to previous years.

The Advisory Committee on Immunization Practices (ACIP) recommends that Afluria should not be used in children aged 6 months through 8 years because of increased risk for febrile reactions noted in this age group with Seqirus’ 2010 Southern Hemisphere IIV3.

How is Afluria given?

Afluria Quadrivalent is given in a single 0.5-mL shot in the upper arm. It can be administered with a needle or with PharmaJet Needle-Free Injection System that uses a thin jet of water to deliver the vaccine.

Afluria Trivalent is given in a single 0.25-mL shot in the thigh in infants, and in the upper arm in toddlers and young children.

Can Afluria cause the flu?

No. Afluria contains an inactivated (dead) virus that can’t cause the flu, but stimulates the antibodies to develop immunity. This can cause mild flu-like symptoms in some people, but not the flu.

When should I get a flu shot?

Each year’s new flu shot is usually available by August. You should get a flu shot between Halloween and Thanksgiving. Flu season in the United States peaks between December and March in most years.

Children 6 months through 35 months of age should receive one 0.25-mL dose of Afluria Trivalent, unless they have never been vaccinated, in which case they should get two 0.25-mL doses: One on day 1 followed by another approximately 2 weeks later.

Children 36 months through 8 years old should receive one 0.5-mL dose of Afluria Trivalent, unless they have never been vaccinated, in which case they should get two 0.5-mL doses: One on day 1 followed by another approximately 4 weeks later.

Children over 9 years old should get a single 0.5-mL dose of Afluria Trivalent.

Adults can get a single 0.5-mL dose of Afluria Trivalent or Afluria Quadrivalent.

Who should NOT get Afluria?

Afluria is contraindicated in people with known severe allergic reactions (e.g. anaphylaxis) to any component of the vaccine, including egg protein, or to a previous flu shot.

What is Guillain-Barré Syndrome?

Guillain-Barré Syndrome (GBS) is a severe reaction that can occur within 6 weeks of Afluria and cause nerve damage, paralysis, disability, and death. It is estimated to occur in slightly more than one in a million flu shots. The 1976 swine flu outbreak resulted in mass-vaccination and an increased rate of GBS.

How long does it take for Afluria to work?

The full effect of Afluria is generally achieved around 3 weeks after vaccination.

How long does Afluria protect me from the flu?

It depends on what type of flu viruses are circulating around the world. Even in the best case scenario, flu shots are only around 50% effective at protecting you from the flu. The effectiveness goes down over time, which is why you need a new flu shot every year.

What are common Afluria vaccine side effects?

In children, the most common side effects of Afluria Trivalent were pain, redness, and swelling where the shot was given, irritability, runny nose, fever, cough, loss of appetite, vomiting/diarrhea, headache, muscle aches, ear ache, wheezing, and sore throat.

Fevers occurred in 23% of children between the ages of 6 months and 3 years old after the 1st dose, and 23% after the 2nd dose of Afluria.

Fevers occurred in 16% of children between the ages of 3 years and 9 years old after the 1st dose, and 8% after the 2nd dose.

In adults 18-64 years old, the most commonly reported injection-site reactions of Afluria Quadrivalent were pain (40%), muscle pain (20%), and headache (20%).

Afluria is associated with the following mild side effects:

What are severe side effects of Afluria?

What is in Afluria?

Thimerosal, a mercury-based preservative, is not used in the single-dose versions of Afluria, but the multi-dose vaccines do contain thimerosal. Each 0.5-mL dose contains 24.5 mcg of mercury.

Can Afluria Cause Guillain-Barré Syndrome (GBS)?

Flu vaccines like Afluria sometimes cause Guillain-Barré Syndrome (GBS), a medical condition in which the immune system accidentally attacks nerves.

Can Afluria Cause SIRVA?

Patients who receive a needle injection of Afluria in the deltoid muscle of the upper arm can potentially develop Shoulder Injury Related to Vaccine Administration (SIRVA).