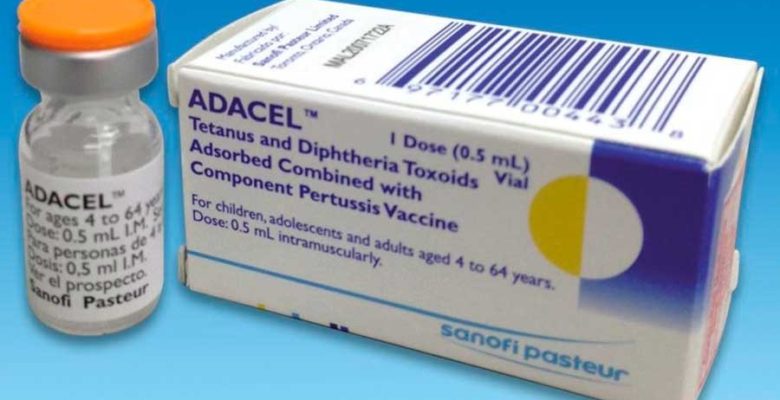 Adacel is a Tdap vaccine for teenagers and adults. It is usually given as a booster shot against tetanus, diphtheria, and pertussis around the age of 11 or 12 years old. Adacel is about twice as likely to cause fevers in teenagers than the Td vaccine.

Adacel® is a booster shot against tetanus, diphtheria, and pertussis (whooping cough) for people between age 10 and 64 years old. Adacel is made by Sanofi Pasteur and approved by the FDA in 2005.

What type of vaccine is Adacel?

Adacel is a Tdap vaccine. It is a booster shot that contains a full-strength immunization against tetanus (T) and lower-dose immunizations against diphtheria (d) and acellular pertussis (ap).

Who should get Adacel?

Adacel is a booster shot that is usually given to teenagers who are around 11 years old who completed the DTaP immunization schedule before their 7th birthday. There should be 5 years between Adacel and their last vaccine against diphtheria, tetanus, or pertussis.

One dose of Adacel can also be given to adults up to 64 years old who did not get Adacel or another Tdap vaccine as teenagers. Afterward, adults should get the Td vaccine booster shot every 10 years.

Who should NOT get Adacel?

Adacel should not be given to people who have had severe allergic reactions (e.g., anaphylaxis) to any ingredient in Adacel (see below for a list) or any other vaccine against diphtheria, tetanus, or pertussis.

Adacel should not be given to anyone who had encephalopathy (e.g. coma, decreased level of consciousness, prolonged seizures) within 7 days of a previous vaccine against pertussis.

Adacel may pose higher risks for people who have:

One. Adacel is given in a single 0.5-mL injection in the deltoid muscle of the upper arm.

Yes. One dose of Adacel is good for 10 years of protection against diphtheria, tetanus, and pertussis. Afterward, you will need a booster shot of the Td vaccine every 10 years.

What are common side effects?

The most common side effects of Adacel depend on the age of the person receiving the vaccine.

What are severe side effects of Adacel?

What is the risk of fever from Adacel?

About 1.4% of adults developed a fever over 100.4°F within 14 days of receiving Adacel during clinical trials.

What else is in Adacel?

The ingredients in Adacel include:

Can Adacel cause SIRVA?

When Adacel is injected in the deltoid muscle of the upper arm, it can potentially cause Shoulder Injury Related to Vaccine Administration (SIRVA). This devastating injury is believed to occur when the vaccine needle is injected too high or too deep, and it accidentally damages sensitive tissues in the shoulder. It can cause permanent shoulder pain, muscle weakness, and limited range of movement.