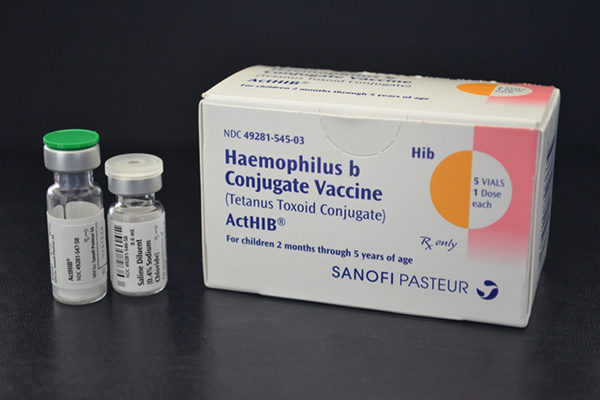 ActHIB is a Hib vaccine that is given in a series of 4 shots to infants and children under 5 years old. ActHib immunizes against a bacterial infection with Haemophilus influenzae type b (Hib disease).

ActHIB® is an immunization against infections with Haemophilus influenzae type b (Hib disease). It is approved for children between the ages of 2 months and 5 years old. ActHIB is a monovalent vaccine manufactured by Sanofi Aventis that was approved in 1993.

ActHIB is given in a series of four 0.5-mL injections into the thigh muscle or upper arm, with one shot given at the ages of 2 months, 4 months, 6 months, and a booster shot between 15-18 months of age.

Who should NOT get ActHIB?

ActHIB should not be given to anyone who has experienced an allergic reaction (e.g, anaphylaxis) after a previous vaccine against Hib disease, tetanus, or any component of the vaccine.

The risks and benefits of ActHIB should be carefully considered in patients who developed Guillain-Barre Syndrome (GBS) or severe muscle weakness within 6 weeks of a previous tetanus vaccine.

What are the most common side effects of ActHIB?

The risk of side effects depends on the dose of ActHIB and the age of the child. For children between 15-20 months old, the most common side effects within 6 hours were:

In children between 2-16 months old, the most common side effects were fussiness or irritability (75%), inconsolable crying (58%), and decreased activity or lethargy (51%).

ActHIB is commonly given at the same time as Daptacel® (DTaP) and Ipol® (Inactivated Polio Virus). In children between 2-16 months old, the most common side effects were fussiness or irritability (75%), inconsolable crying (58%), and decreased activity or lethargy (51%).

What is the risk of fever from ActHIB?

Fever over 102.2ºF occurs in about 2% of children between 15-20 months old within 48 hours of immunization with ActHIB vaccine.

What severe side effects of ActHIB were reported?

The following side effects were reported spontaneously after ActHIB was approved, but it is unknown if they were caused by the vaccine:

What ingredients are in ActHIB?

ActHIB is composed of Hib capsular polysaccharide that is chemically bound (conjugated) to a tetanus toxoid. It contains no preservatives or thimerosal.

When ActHIB is reconstituted with saline (0.4% sodium chloride), each 0.5-mL dose is formulated to contain 10 micrograms (mcg) of purified capsular polysaccharide conjugated to 24 mcg of inactivated tetanus toxoid, and 8.5% of sucrose.

When ActHIB is injected in the upper arm, it can potentially cause Shoulder Injury Related to Vaccine Administration (SIRVA). This occurs when the needle accidentally hits delicate tissues in the shoulder, resulting in a serious inflammatory immune reaction. It can cause permanent shoulder problems, such as pain or debilitating muscle weakness.